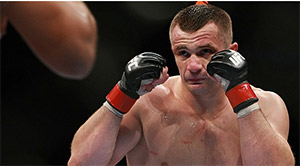 Mirko “Cro Cop” Filipovic is making another run in the UFC. In his debut return, he took out Gabriel Gonzaga at UFC Fight Night 64 after landing an elbow in the clinch which rocked Gonzaga and finished the heavyweight via TKO in the third round. It was a spectacular finish, which I’m sure fans of the former PRIDE veteran want more of.

And indeed they’re going to get. “Cro Cop” announced on Saturday on Facebook that he will be facing Anthony Hamilton in an upcoming UFC event. However, the MMA promotion has not confirmed or announced the fight yet.

Hamilton, 35, fairly new in the UFC made his debut at UFC Fight Night: Swanson vs. Stephens in June 2014. The American mixed martial artist who trains at Jackson’s MMA has had two loses and two wins in the UFC with the most recent victory against Daniel Omielańczuk by unanimous decision.

Cro Cop vs. Hamilton is expected to be a heavyweight contest at UFC Fight Night 79 on November 28th in South Korea.