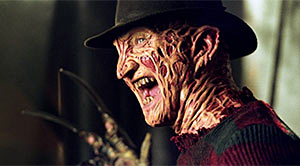 Thanks to Robert Englund, Freddy Krueger turned out to be one of the most iconic horror characters of all-time, which means A Nightmare on Elm Street is always going to be a hot target for a reboot, regardless if Englund is in or out. We may hate the idea that someone else such as Jackie Earle Haley may fill in the shoes for Freddy again, but the producers know the interest will always be present because the franchise has a massive cult following since the first film was released in 1984. However, if Englund played Freddy one last time that would definitely be an ultimate gift for the fans, in my opinion.

Anyhow, details on who will officially play Freddy in the next installment is unknown, but we can at least confirm that New Line Cinema – a.k.a “The House that Freddy Built” is looking to bring back the Springwood slasher another time on the big screen in a new reboot.

According to The Tracking Board (via Bloody Disgusting), New Line is currently developing A Nightmare on Elm Street reboot that will disregard the 2010 remake. So, I guess the doors are open for Englund. David Leslie Johnson (The Conjuring 2: The Enfield Poltergeist) is reportedly attached to pen the screenplay, with Toby Emmerich, Walter Hamada, and Dave Neustadter set as overseers for the reboot.

If A Nightmare on Elm Street moves forward with the right people in place, meaning Englund, then the film would mark as the tenth installment in franchise with nine of them credit to him.

We’ll continue to keep you guys in the loop on the new reboot, so keep on reading daily at Yell! Magazine.