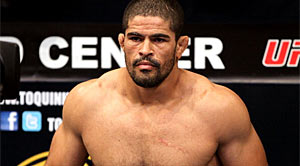 Following his most controversial win to date against Jake Shields on Saturday night, World Series of Fighting is now stepping into the same shoes as the UFC, they have decided to strip the welterweight title from Rousimar Palhares.

According to WSOF president Ray Sefo via Mondays episode of the MMA Hour with Arial Helwani, Palhares has not only been stripped, but has also been suspended indefinitely for eye gouging Jake Shields and holding onto a kimura too long at WSOF 22 in Las Vegas. I believe it’s a decision most MMA fans and fighters will agree with.

Not only did he did it once or twice, he did it numerous times. And he was warned by the referee on four different occasions.

He [referee] should have taken a point or maybe even disqualified him after he did it four times.

At the moment, Safo is awaiting a review from The Nevada Athletic Commission (NAC) to decide how long the suspension will last. The NAC will most likely punish Palhares and Shields, who also made the mistake of stricking Palhares after the bell in retaliation.

I think the sad part of this is the guy is a great fighter, said Safo. When Jake Shields is tapping nine times and the referee is tapping you six, seven times and literally pulling you off, that’s where people are gonna get hurt. We’re in a sport. We’re not in a war where we have to eliminate people.

The NAC has already withheld Palhares’ win bonus money and both fighters will have disciplinary hearings at the next NAC meeting, which is scheduled for August 13, 2015.