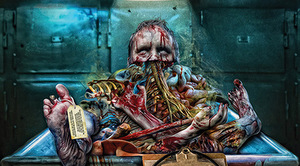 I proudly present to you, our debut album, Forensic Nightmares! Less than a year and a half after we started Cut Up, our hard work and determination has paid off and resulted in this blasterpiece. We couldn’t be more satisfied with the album! Forensic Nightmares clearly makes a statement about what Cut Up is all about, and what our mission is for the future. So don’t sit back and enjoy this, but bang your fucking heads while blasting it at maximum volume! Then repeat! Cheers!