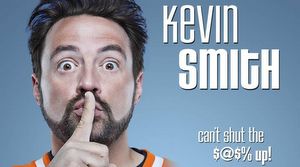 An Evening with Kevin Smith:

Kevin Smith is arriving at the Montreal Comiccon with for a special one-night-only engagement on Friday, July 3, 2015. An Evening with Kevin Smith will feature the legendary writer, director (and occasional actor) from New Jersey dispensing wisdom to hordes of fans. This interactive session is sure to leave fans with a memorable experience they will cherish for years to come.

It was over 20 years ago that the world was introduced to Kevin Smith’s first movie, Clerks (1994), which won the highest award at the Sundance film festival and was brought to theaters by Miramax. The movie went over so well that Smith was able to make the cult-favorite, Mallrats (1995). Since then, he’s written and directed several films with large cult followings, including Chasing Amy (1997), Dogma (1999) starring Ben Affleck and Matt Damon, Jay Silent Bob Strike Back (2001), Clerks II (2006), scripted Zack & Miri (2008), and ventured into horror with Red State (2011).

An Evening with Doctor Who Companions:

On Saturday night, July 4, Montreal Comiccon is proud to present An Evening with Doctor Who Companions (Who needs the Doctor?), a 60-minute special Q&A event featuring well-loved Doctor Who companions Billie Piper (Rose Tyler) and Karen Gillan (Amy Pond) on stage with a very special guest, Eve Myles, from the spin-off Torchwood. Fans will get to listen to their stories about traveling with the Doctors through time and space and, well, Cardiff, and take some questions from fans along the way.