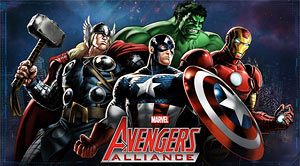 With the latest Marvel comic book adaptation still riding high in the box office, game lovers have begun looking around to find the latest re-creation of their favorite action heroes. Avengers: Age of Ultron once more sees Iron Man, Thor, The Hulk, and Captain America team up for another battle royal and fans of the film have been frantically hunting through their iOS, Android, and Google Play stores for Avengers and Marvel-related games where they can become immersed in the action. Despite the fact that the Avenger’s is a popular franchise, even featuring Paddy Power casino slots variations, one of the most successful Marvel mobile-based games in recent years has been Avengers Alliance.

Whilst The Avengers movies themselves may not yet have recruited the likes of other heroes and freedom fighters in the Marvel Universe such as Spider-Man, the X-Men, or the Fantastic Four, the Avengers Alliance game does, in fact, bring them all together. The game released by Marvel Entertainment has been floating around on iOS for a couple of years now and just recently made it on over to the Google Play app store. It’s full of battles and missions for the player to get involved in, and it gets frequently updated with new and exciting quests and adventures, including the introduction of the Guardians of the Galaxy clan (playing as Rocket, Gamora, Drax, Groot, or Star-Lord), with new costumes and their own storyline to play.

Avengers Alliance does include in-app purchases to help further your experience and allows you to buy in-game items and enhance other aspects of the game that are customisable. The game was first released on Facebook and has had many features from that original format developed into its mobile-based alternative. There’s still quite a way to go in developing and evolving the app further to match the quality of its predecessor, but with each update it slowly but surely improves over time.

The game includes a vast array of familiar Marvel characters and brings together classic X-Men personalities such as Wolverine, Beast, and Cyclops as well as mixing in a number of other iconic Marvel heroes like Deadpool, Mr. Fantastic, She-Hulk, and Black Widow. The game includes a special Player vs. Player (PVP) mode as well as giving players the opportunity to earn new heroes before they become available to purchase by competing and completing Special Operations (Spec Ops) missions.