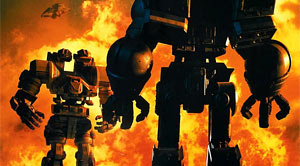 On July 7th, Scream Factory is bringing back the magic of Robot Jox to Blu-ray, which will contain insightful bonus content, including a new interview with actor Paul Koslo, audio commentary, behind-the-scene footage and much more. A must-have for movie collectors, pop culture enthusiasts and fans of Stuart Gordon to complete their home entertainment library, Robot Jox Blu-ray is priced to own at $24.97 SRP.

You can pre-order it now via this link.