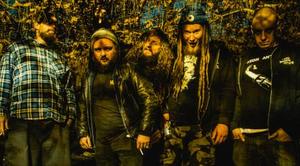 The release of King Parrot‘s eagerly anticipated Dead Set is just a week away, and today Revolver is streaming the new album in its entirety! Go and listen at this link.

Captured by Philip H. Anselmo and Michael Thompson with Steve Berrigan at the infamous Nodferatu’s Lair (Down, Eyehategod, Superjoint Ritual) in Louisiana, King Parrot’s Dead Set wields 10 grind-laden, punk-infused odes of defiant audio savagery bedecked in the dark, cynical humor for which the band has become notorious. A true leap forward from their Bite Your Head Off debut, Dead Set parades a distinct maturity from a band who’s committed to the rigors of international touring, slaying audiences through Asia, North America, Europe, and Australia on a steady basis.

Emerging from the Australian metal scene, King Parrot draws influence from the thrash, grind, hardcore, and punk scenes of the ’80s and ’90s, and have pillaged their way to international recognition since their inception in 2010. The band was recently nominated in the category of “Best New Band” in Metal Hammer‘s Golden God Awards.

Dead Set will infiltrate North America on May 19th, via Housecore Records. Pre-orders are here.