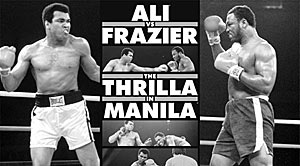 For any boxer, the dream is that big fight in Las Vegas. The lights, the glamour, the millions upon millions of dollars; it’s the pinnacle of a pugilist’s career.

For the likes of Floyd Mayweather and Manny Pacquiao it’s a second home and when they face off on the May 2nd for the biggest fight in boxing history, it’ll be no different. Tickets are changing hands for thousands of dollars and, come next weekend, the eyes of the world will be cast on Las Vegas Boulevard.

But whilst the city is where every boxer wants to be, it’s just one of many great destinations all over the world, from huge arenas to tiny boxing clubs where the Pretty Boy made his first appearances.
Over the years venues both big and small have developed quite the history, welcoming unforgettable fights and nights that helped create legends of the sport. Of course, you have to start on the strip and at the Mecca of boxing, the MGM Grand, where Floyd “Money” Mayweather almost has a residency. It’s already made plenty of boxing history with almost every huge fight over the past decade happening in the arena, and it will once again be at the very center of the fight world for the exciting Mayweather vs. Pacquiao showdown.

It’s seen some of the biggest fights in the world over the years, including the infamous Tyson vs. Holyfield rematch in which “The Real Deal” left with only half an ear, as well as De La Hoya vs. Pacquiao and Mayweather.

The 16,800 capacity stadium is at the very south of the strip and was notably taken over by thousands of the British in late 2007, creating one of the most electric atmospheres in boxing as Ricky Hatton fought Mayweather. It’s a venue that every boxer wants to fight at and every fight fan wants to watch a fight at, so much so that the “Fight of the Century” as it’s being dubbed sold out in 60 seconds.

It’s the perfect location, surrounded by sold-out musical residencies, slot machines galore, and the famous blackjack tables where many celebrities have played, often see fans playing out of chance to meet the celebrities (it is always good advice to practice before playing on the real tables). It’s a city with a competitive edge in every department, and the finest place for the sport. But we aren’t finished in Vegas and the thrills of fighting in the entertainment capital of the world just yet. Of course, it’s renowned for its ample casinos and quality gaming space, but it’s also not short of boxing venues either.

Since 1984, it’s been a popular choice for world champions with the likes of George Foreman, Roy Jones Jr., and the highly anticipated Evander Holyfield vs. Lennox Lewis fight taking place there.

It was the destination for Joe Calzaghe’s only flirting with Las Vegas during his illustrious career, beating Bernard Hopkins on a fight card that included Olympic gold medallist Audley Harrison, Nathan Cleverley, and WBC light welterweight champion Danny Garcia.

And it isn’t just championship boxing that is lured in by the 18,000 capacity arena. Plenty of Las Vegas’ sports teams frequent the venue, including the university’s basketball team and the Las Vegas Outlaws, Vince Neil, of Motley Crue fame’s arena football team.

Mexican legend Julio Cesar Chavez fought there in 1992, defeating Hector Camacho to retain the WBC Light Welterweight title and 20 years on his son was doing the same, although he couldn’t retain his middleweight belt, falling to Argentinian Sergio Martinez. Fight nights at Madison Square Garden often bring the entire city to a standstill. It’s the home of boxing and regularly sees the world’s biggest stars enter the ring. That began from day one, opening in 1968 and welcoming the likes of Rocky Marciano, Roberto Duran, and The Fight of the Century between Muhammad Ali and Smokin’ Joe Frazier. In fact, International Boxing Hall of Famer Ken Buchanan said of the venue, “From a boxer’s point of view, once you have boxed there you can die in peace.”

And for many of the best, they can do just that. To this day it’s an incredibly important venue for the sport. Wladimir Klitscho defeated Bryant Jennings just last week and to this day the best names are continuing to come back to the arena.

It will of course be remembered for that Ali vs. Frazier fight. Such was demand for tickets, even Frank Sinatra couldn’t get ringside seats, instead having to get close to the action as a photographer for Life Magazine.

The fight itself also saw Ali’s first ever defeat, setting up one of sport’s biggest rivalries. Revenge came sweet for Ali, though, defeating Frazier in 1974, at the Garden before doing it again a year later in “The Thrilla in Manila.” And the venue for “The Thrilla in Manila” is what Madison Square Garden is to New York. The Araneta Coliseum was built in 1958, and has a big place in boxing history, not just for the Frazier vs. Ali fight, but also some big fights starring Manny Pacquiao.

It’s continually named as one of the best fight destinations on the planet and with one of the greatest fights of all time held there in front of 28,000, it certainly finds itself in boxing folklore.

It’s no surprise Pacquiao has gone on to fight there, becoming a legend himself in the process, securing the destination’s reputation as a boxing hot-spot and perhaps the capital of the sport in the eastern world. Not only did the dreams of fictional boxing legend Rocky Balboa become true through the Philadelphia boxing halls, but The Blue Horizon on North Broad Street made a great deal more come true with the likes of Bernard Hopkins and Tim Witherspoon learning their trade at the venue.

Originally constructed of three four-story houses, the venue opened in 1961, although its history with boxing dates back much earlier, right back to 1938, when heavyweight Willie Reddish fought there.

Hopkins fought there seven times in the early stages of his career, winning every one, setting himself up for a career that would see him win numerous titles and fight at the very top of the sport. London is awash with boxing venues, but none beat York Hall in Bethnal Green. One of the most important venues in British boxing, it’s hosted the likes of Ricky Hatton, David Haye, and Chris Eubank on their way to stardom, and to this day it’s still housing the finest young boxers every weekend.

Barely seating 1,000, it creates a truly buzzing atmosphere on fight night, getting as close to the action as possible, watching boxers that will likely be on stadium cards in a year’s time. Like Vegas, Atlantic City has been putting on big fights for it seems almost an eternity now, with everyone from Sugar Ray Leonard to Oscar De La Hoya to Floyd Mayweather fighting there.

Opening in 1929, the 14,000-capacity venue is, however, most known for hosting 4 of 7 title defenses, including the 91-second knockout of Michael Spinks.

Other huge fights have taken place here, and there’s barely been a dull fight — Evander Holyfield defeated George Foreman as he approached the end of his career. The Arena Mexico in the capital of the country may well be famous for its Mexican wrestling bouts, but when it comes to boxing it really has been home to some of the greats.

During the ’60s and ’70s, Ruben Olivares, Chucho Castillo, and Pipino Cuevas all entered the ring here, sending their home crowd into raptures, particularly for Ruben Olivares who fought his last ever bout in the venue.

Championship boxing has been a little light over the past few years with only Jorge Arce fighting in the arena for the WBA Super Flyweight title.