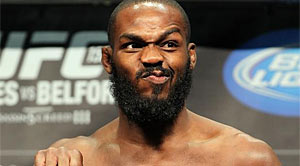 UFC Light Heavyweight Champion Jon Jones still hasn’t reached out to the Albuquerque Police Department for the possible involvement in a three-car accident, which unfolded on Sunday afternoon in Albuquerque, New Mexico. A pregnant women in her 20s was injured, she fractured her arm and wrist in the accident, according to details.

A report filed by Detective Tommy Benavidez indicates that Jones is the primary suspect in the hit-and-run accident and a warrant for his arrest on felony charges was issued earlier today. Witnesses informed the police that a man believed to be Jones allegedly ran a red light, causing a three-car accident. The man then fled the scene on foot, before returning to a rental car (silver Buick) to retrieve cash and fleeing once again. Officers later found a pipe with marijuana inside of the car and documents with the name “Jonathan Jones” affixed in relation to MMA and Nevada.

As a result of the injuries caused by the car accident to the women, Jones could possibly face several felony charges, if convicted. The warrant for his arrest can now be viewed online, or right below.