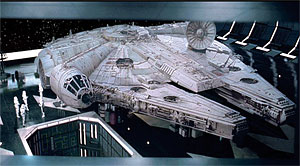 The first Star Wars infographic we published on Yell! Magazine gave fans of the space opera franchise a solid perspective on how much it would cost to build Han Solo’s Millennium Falcon. The second revealed 13 rare facts about the ship, and the third infographic below explains how the fastest “hunk of junk” in the galaxy fits into the Star Wars mythos. From a failed smuggling run to helping the Rebellion destroy a powerful Death Star, the Millennium Falcon clearly has an important role in Star Wars.

Here is how the famous starship reshaped the galaxy: