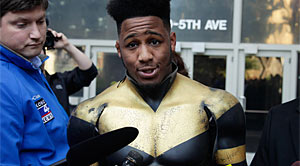 Criminals in Seattle, Washington, may know Ben Fodor by his superhero name, “Phoenix Jones,” but the nickname will soon be very familiar within the MMA world. The real-life superhero just inked an exclusive contract last week with World Series of Fighting. His first fight under the MMA banner will take place on the main card of WSOF 20.

Brother of UFC veteran Caros Fodor and leader of the Rain City Superhero Movement in Seattle, Ben was on the cusp of stepping away from amateur MMA until WSOF offered him a lucrative deal he couldn’t refuse. A deal that allows Fodor to use his superhero name and continue his crime-fighting life in Seattle’s streets:

Fodor (5–0-1) will meet Emmanuel Walo (7-2-1) in a welterweight bout inside the cage at WSOF 20, an event that will air live on NBCSN on April 10, 2015. WSOF 20 is headlined by a light heavyweight tilt between David Branch and Ronny Markes.