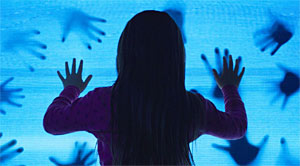 Not everyone is excited for the Poltergeist remake release because remakes usually suck. However, for those who are excited about this one will be happy to hear that the release date for the Gil Kenan directed horror film has been bumped up. That’s right! The angry spirits from Poltergeist will now invade theaters on May 22, 2015, rather than in July.

Poltergeist will also be available in 3-D for an extra scary time.

Legendary filmmaker Sam Raimi (Spiderman, Evil Dead, The Grudge) and director Gil Kenan (Monster House) contemporize the classic tale about a family whose suburban home is haunted by evil forces. When the terrifying apparitions escalate their attacks and hold the youngest daughter captive, the family must come together to rescue her before she disappears forever.