Tom DeLonge: I Want To Believe 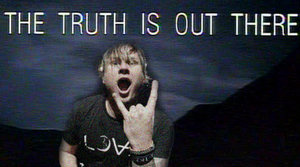 The other day, Papermag.com published an interview with ex-Blink-182 member, Tom DeLonge, which was conducted prior to the Blink separation. The extensive interview deals entirely with DeLonge’s obsession with aliens and reads like research for an episode of The X-Files and, in fact, if you squint at the accompanying photo, DeLonge actually looks a bit like David Duchovny.

But the interview isn’t a piece of fiction, or at least DeLonge believes 100% in what he’s saying about aliens. Through the years he’s hardly concealed his beliefs, letting them be known publicly and even giving him musical inspiration. And he has done extensive research and networking to support his claims, whether you believe him or not.

Given DeLonge’s immersion in the subject, does that make him nuts or just better informed than the majority of us?

I’m inclined to believe him, since I share his belief that there’s intelligent life in the universe besides our own. It would be extremely arrogant of us to think otherwise. But have aliens visited planet Earth? I have no idea, but there’s no way I’d rule it out.

Of course, with a lot of what DeLonge says can’t be substantiated. We’ll just have to take his word for it when he talks about such things as a 70-year-old man telling him to be careful and not to get into a car if someone offers him a ride (after DeLonge had described the mechanics of a spacecraft), or his experience with “lost time” while camping near Area 51, or his claims that he’s had his phones tapped, or that the government purports conspiracy theories to distract our attention.

Then there’s the stuff that can be “verified,” like the NASA symposiums, the Vatican talking about life out there, and the consensus among top minds that there is life out there.