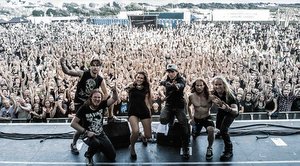 Amaranthe will return to North America this spring for a headline tour, which will be the band’s first trek through the U.S. and Canada since last fall, when they served as main support for Within Temptation. On this run, however, fans will enjoy the full Amaranthe experience, as it will be their show.

Since the October 2014 release of Massive Addictive, which debuted at No. 1 on Billboard‘s Heatseekers Chart, Amaranthe have gained steady momentum, with the addictively catchy single “Drop Dead Cynical” enjoying an exciting wave of success, garnering major spins at SiriusXM’s Octane and currently climbing the Active Rock radio charts.

The band recently shot a video for “Digital World,” which will premiere shortly. Stay tuned!

Joining Amaranthe on this spring trek will be I Prevail, as well as their labelmates in Santa Cruz.