UFC Returns To Montreal With Title Fight Between T.J. Dillishaw And Renan Barao 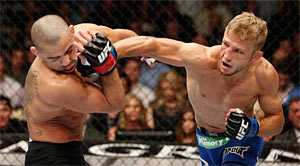 The UFC makes its return to Montreal with a highly-anticipated re-match between the world’s No.9-ranked pound-for-pound mixed martial artist, UFC bantamweight champion T.J. Dillashaw (12-2, fighting out of Sacramento, Ca., USA), and No.1 contender Renan Barao (35-2, 1NC, fighting out of Rio de Janeiro, Brazil) at Bell Centre on Saturday, April 25.

Dillashaw and Barao’s first fight earned “Fight of the Night” honours at UFC 173 in May 2013. The 135-pound champion Barao entered the Octagon with an impressive 32-fight unbeaten streak and three successful title defenses since becoming champion in 2012. Barao was considered the heavy favourite against Team Alpha Male’s Dillashaw. However, Dillashaw dominated Barao throughout four rounds and earned a fifth round TKO victory via head kick and punches. The underdog prevailed and Dillashaw won the bantamweight belt and was awarded a “Performance of the Night” bonus.

The two were slated for a re-match at UFC 177 in August 2014, but Barao was forced to cancel due to issues with his weight cut. With Barao out, Joe Soto, who was originally scheduled to fight on the undercard, stepped in to challenge Dillashaw for thetitle. After four rounds, Dillashaw landed a head kick to earn another KO victory in the fifth round to defend his title for the first time. Dillashaw has now won seven of his last eight, with three by submission and five by KO.

Barao was finally back in action in December 2014 when he earned “Performance of the Night” with an arm triangle choke submission victory over Canadian Mitch Gagnon. Barao is a dangerous submission specialist and has won 15 of 35 by submission and eight by knockout. Come April 25, the former champion will look to leave it all on the line to bring UFC gold back to Brazil.

In the co-main event, Canadian welterweight standout Rory MacDonald (18-2, fighting out of Montreal, Canada) will take on former Olympic judoka Hector Lombard (35-4-1, 1NC, fighting out of Coconut Creek, Fl., USA). MacDonald, 25, has won three straight, including an impressive third-round TKO of Tarec Saffiedine in October 2014. He owns eight wins in his last nine fights, with his only loss in that stretch coming via split decision against Robbie Lawler, the newly minted champion. Currently ranked No.2, MacDonald is hungry for a title shot and hopes a win over Lombard will solidify his spot in a championship bout.

Lombard is also riding a three-fight win-streak and is currently ranked No.5 at 170-pounds. The 36-year-old Cuba native owns 22knockouts and four submission wins. Since turning pro in 2004, Lombard has only lost four fights, all by way of decision. His heavy-hands and agility pose a threat to his opponents but he has yet to face a Top five contender like MacDonald since dropping to welterweight in October 2013.

Veteran Quinton “Rampage” Jackson (32-10, fighting out of Irvine, Ca., USA) will make his return to the Octagon after a two year absence. He will face No.13 ranked Fabio Maldonado (22-7, fighting out of Florianopolis, Santa Catarina, Brazil) in a light heavyweight match-up. Jackson, who is currently on a three-fight win-streak, last competed in the UFC in January 2013 when he lost to Glover Teixeira via unanimous decision. Meanwhile, Maldonado, who has won four of his last five, is coming off a TKO victory over Hans Stringer at UFC 179 in October 2014.

In addition, No.9 ranked Englishman Michael Bisping (26-7-0, fighting out of Manchester, England) will face a tough test in finishing specialist and No.10 ranked C.B. Dolloway (16-7, fighting out of Tempe, Az., USA). Both middleweights are coming off a loss and will look to get back on track to continue their climb up the rankings.