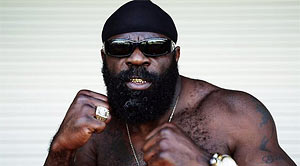 Guess who’s making a return in the world of MMA? It’s Kimbo Slice, a former street brawler who became instantly famous in unsanctioned street fights that were distributed on SublimeDirectory and YouTube back in the day. After his first street fight loss to Sean Gannon, Kimbo turned to professional MMA. He made his debut at Cage Fury Fighting Championships 5 and then hit a bigger stage in EliteXC.

In 2008, EliteXC ceased operations and UFC President Dana White granted Kimbo a shot in The Ultimate Fighter. After the season finale of TUF: Heavyweights, Kimbo had his first UFC pay-per-view event against Matt Mitrione at UFC 113, losing in the second round via a TKO. That was his last MMA fight before hanging up the gloves in 2010, but it now appears Kimbo is going to strap them back on again.

According to a report from CombatPress.com, Kimbo has inked a deal with Bellator MMA. The official announcement is to be made public today during the Bellator 132 telecast. There’s no word yet on when his first fight will take place, however, we know for sure he will be training at American Top Team for his upcoming MMA fights.