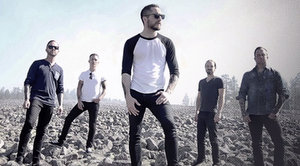 Swedish hardcore punk band, Raised Fist, will soon release their sixth full-length album, and first in five years, From the North, via Epitaph Records. The album is scheduled to blow eardrums on January 19, 2015, and pre-orders can be made on iTunes right now!

Get the first taste of the album with “Flow” in the player above.

If you had to characterize Raised Fist – one of Sweden’s hardcore scene’s longest-running and most vital acts – with just one word, “respect” would be it. Want proof? Lou Koller of Sick Of It All described Raised Fist as “one of the world’s three most progressive hardcore bands,” Bruce Dickinson of Iron Maiden played them on his radio show, and Jona Weinhofen (I Killed The Prom Queen, ex-Bring Me The Horizon) cites them as a huge influence.

This time, everything has connected, like pieces in a perfect puzzle. You know when you have a classic album recorded. When you do something with your heart, and the timing is right, there is magic. That is what happened with From The North. From The North is where we are from, and we do shit differently up here! We do it hard, whether it’s on stage or in the studio.

From The North Track Listing: