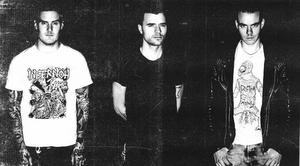 If you need a new fight song, Halshug‘s hardcore offering, “Total Destruktion,” might be what you’re looking for. In their crust punk aggression — which is said to permeate throughout their debut LP, Blodets Bånd — there’s a definite industrial metal sound to the chromatic tone of the riffs and the rhythmic sledgehammer pulse of the drums on the album’s first single. Go check out the punishing “Total Destruktion” on Cvlt Nation and let us know what you think.

Halshug, which translates to “Decapitate,” will release Blodets Bånd on February 24th, via Southern Lord

Formed in Copenhagen two years ago, the riotous young act, Halshug, unloads some of the most traditionally styled but urgently unloaded traditional crust punk/d-beat hardcore to be found. The enraged sentiment of archetypal leaders of the genre, Doom, Anti Cimex, and no doubt, Discharge, and direct influence drawn from Infernöh, Hoax and Death Token, is unapologetic in its presence in the band’s delivery, which, fueled by society’s modern-day ills, finds Halshug already in line with Wolfbrigade, Skitsystem, and the best of the movement’s current top acts. Through only an initial demo followed by their 2013-released Dödskontrol 7″, the band has amassed a punishing name early in the powerful trio’s lifespan through regional and even more heavily concentrated European touring, and continued to expand on their live executions in 2014 with more widespread gigs than ever. Following the release of Blodets Bånd, Halshug will tour abroad through Europe and will invade North America for the first time in 2015.