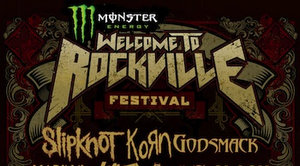 Monster Energy Welcome To Rockville will celebrate its fifth anniversary at Jacksonville, Florida’s Metropolitan Park on April 25th and 26th! Bay Area thrash pioneers Exodus are along for the ride this year, joining a stacked rock line-up that includes Slipknot, Korn, and Godsmack, along with Marilyn Manson, Slayer, Ministry, Slash featuring Myles Kennedy and The Conspirators, the triumphant return of Breaking Benjamin, Papa Roach, Halestorm, The Pretty Reckless, Of Mice & Men, and many more (see below for current band listing).

The exact date that Exodus will perform will be announced next year.

A discounted ticket pre-sale for Monster Energy Welcome To Rockville is available starting Tuesday, December 9th, at 10:00 a.m. ET through Friday, December 12th, at 9:59 a.m. ET. A password for access to the ticket pre-sale can be obtained via WelcomeToRockvilleFestival.com, local Florida, Georgia, and Alabama rock radio stations, and select rock media outlets.

Also visit the site above for VIP ticket info, pricing, hotel packages, and more. Ticket prices will increase in the coming weeks, so fans are encouraged to buy now and save.

Exodus just wrapped up their very successful tour with headliners Slayer and fellow special guests Suicidal Tendencies. Exodus is currently finishing up a run of headlining shows to cap off the tour. See below for all remaining tour dates.