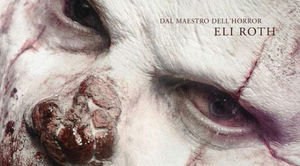 This movie just gives me the heebie-jeebies, and apparently the fine folks in Italy weren’t too fond of the poster either.

The Eli Roth-produced Clown will hit Italian theaters on November 13th, and as to be expected, promotion is in full swing. However, the original poster (seen above) was recently banned and replaced with a censored version (below). If you’re like me and don’t like clowns, you’ll understand why the poster was banned. It also might have something to do with frightening small children who catch a glimpse of the terrifying poster in passing, just as what happened in 1984 with Silent Night, Deadly Night. Come to think of it, there are similarities between these two movies.

Clown started out as a fake trailer by Jon Watts, who directs the feature-length movie penned by himself and Christopher D. Ford.

If you have the balls for it, watch the trailer.

A loving father finds a clown suit for his son’s birthday party, only to realize the suit is part of an evil curse that turns its wearer into a killer.