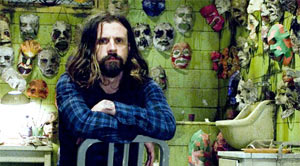 With the completion of crowdfunding his newest film, 31, quickly approaching, I figured that now would as good of a time as any to look back at the career of Rob Zombie. He’s a director whose films I will always be on the lookout for, because, as often as he’s stereotyped as being solely interested in white trash massacres, I never know what to expect when I see “A Film by Rob Zombie.”

No.7 The Haunted World of El Superbeasto The first two movies on this list are barely movies at all. House of 1000 Corpses has gone on to become somewhat of a cult classic, but I doubt that the same will be said of El Superbeasto, which throws lame jokes and sexual innuendoes at you at rapid fire pace, probably hoping that you’ll be so concerned with how bad the current joke is that you’ll forget about how terrible the last one was. It’s really a shame, because the voice cast is amazing, but, as a whole, besides Paul Giammati’s infectious Paul Giamatti-ness, they’re squandered.

House of 1000 Corpses is a great mix of ideas. I won’t call it a fully realized vision of a movie, as the decent characters and themes from it would later be streamlined into the superior The Devil’s Rejects, but House of 1000 Corpses does have its moments, like the death of the cop played by Walton Goggins, or any scene that Sid Haig is in. Sadly, getting these cool moments means that you’ll soon be privy to more “home video” footage of the Firefly family that you have to suffer through. House of 1000 Corpses is Rob Zombie’s attempt to do everything at once for his first feature film project, and accomplishing maybe two of those things.

No.5 Werewolf Women of the SS

Okay, this is a fake trailer, for a movie that will probably never exist. But it’s goofy, and is my personal favorite of all the Grindhouse trailers. Bill Moseley as a Nazi scientist? Nicolas Cage as Fu Manchu? Sybil Danning in anything at all? Sign me up for all of that. Also, the brief glimpses of the drunk Nazi boxing match in the snow are surprisingly beautiful. You know what? Screw the pessimism I had in the first sentence of this entry. I want Werewolf Women of the SS so badly, I can taste the shame of every clueless friend that I’d drag with me to the theater to watch it.

Halloween 2 is a weird story about Laurie Strode’s PTSD that drops any pretenses that Rob Zombie wanted to keep the Halloween series sacred to the notions that fans had about it. He throws out the classic masked look, and replaces it with horses, nightmares, and Malcolm McDowell playing the biggest asshole of his career, which is really saying something, considering that McDowell might have the most lopsided “asshole to decent human being” ratio of any actor. It also contains the most brutal death scenes that the Halloween franchise has ever seen thus far, and I have a soft spot in my heart for redneck, hobo Michael Myers, even if he does disappointingly grunt “Die!” before he gets shot a thousand times by cop extras.

No.3 The Lords of Salem I won’t lie. I thought that the record that they played that was created by the “Lords” was creepy and awesome. And I think the last act of the film, upon further viewing, while a mess, is a wonderfully shot mess. A lot of people tried to compare Zombie’s efforts here to the films of Ken Russell, Roman Polanski, and Stanley Kubrick, but I like to think of it as Rob just trying out something different. And I can appreciate that. I don’t know if Zombie will ever return to this style, and that makes The Lords of Salem special. It’s Rob Zombie saying “No, this one won’t be about killer hillbillies. But it also won’t be about anything that YOU want it to be about, so deal with it.” The first half of Rob Zombie’s Halloween is the best thing he’s ever done. It’s an equal mix of depressing, strange, and horrifying, and I wish that Zombie had gotten his wish of wanting to split Halloween into two movies and spending the first focused on Michael before he broke out of the Sanitarium. Sure, the second half has some cool scenes, but it’s mainly just retreading beats from John Carpenter’s original. Had Zombie been able to use two films to tell his full story of “The Night He Came Home,” this film would probably rank as number one.

No.1 The Devil’s Rejects

In an age where horror movies are often filled with ghosts and enemies that you can’t see and won’t care about, leaving the gore for prime time TV viewers, The Devil’s Rejects feels positively antiquated. It feels like it comes from a time when movies were meaner and more ambiguous in their intentions, which is probably what Zombie wanted since he stated many times that Devil’s Rejects was brought to life due to his love of 70’s road, western and horror films. Featuring iconic characters, dialogue, and enough unsettling violence to fit 500 Paranormal Activities, The Devil’s Rejects is a modern scary classic. I give it 4 Rhode Island Reds.