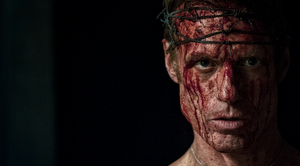 Anchor Bay Entertainment Canada and Raven Banner Entertainment have announced at the close of the 2014 Toronto After Dark Film Festival that they have signed a deal to distribute the action horror film Let Us Prey within the Canadian home entertainment market. This news comes just as the taut new genre film from the UK/Ireland made its Toronto Premiere at a packed screening on the closing night of the festival.

Rachel (Pollyanna McIntosh of The Woman, Offspring), a rookie cop, is about to begin her first nightshift in a neglected police station in a Scottish backwater town. The kind of place where the tide has gone out and stranded a motley bunch of the aimless, the forgotten, the bitter-and-twisted who all think that, really, they deserve to be somewhere else. They all think they’re there by accident and that, with a little luck, life is going to get better. Wrong, on both counts. The mysterious Six (Liam Cunningham of Game of Thrones, War Horse) is about to arrive – and all hell will break loose!

Let Us Prey was directed by Brian O’Malley and is currently wowing audiences around the globe during its festival run which has brought the film to the Fantasia Film Festival, Puchon, Fantastic Fest, and Sitges among others. “Let Us Prey offers a tight, tense horror experience,” says Sound On Sight, as it features “…very strong performances and expertly maintained atmosphere and tension, with enough violence and gore to keep things interesting without being excessive.”