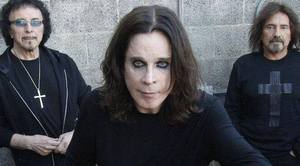 “We’re going to do one more album, and a final tour,” Ozzy Osbourne told Metal Hammer.

Neither the details nor the timelines are established yet, but Ozzy is hoping to start writing a new Black Sabbath album with Tony Iommi and Geezer Butler in early 2015. At the very least the writing process will begin “sooner rather than later,” according to Ozzy. “I don’t know if we’ll be writing in England or L.A., but I’ll fly to the fucking moon for it if I have to,” Ozzy added in the interview.

Ozzy is also well-aware that much of what they can do and when they can do it is dependent on Iommi’s health with regard to his cancer treatment. However, as Ozzy told his wife, Sharon, he’d like to get this project done before he turns 70 years old (that gives him 4 years and some change).

Black Sabbath’s most recent album, 13, debuted at Number 1 on the U.S. charts and in other countries.

We’ll keep you posted as Black Sabbath news develops. Until then, let us know in the comments section below if you’d like another Sabbath album.