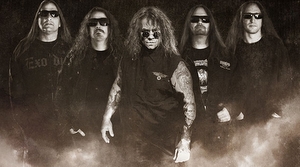 Exodus has just released the second single from their upcoming album, Blood In Blood Out, due out October 14th, in North America.

The newly released title track is a total thash metal ripper, harnessing everything that old-school thrash was: punk-style drumming, rapid-fire strained vocals, a chant-worthy chorus, chugging rhythm guitars, riffing madness, blistering mid-song solo, and oh that bass guitar sound. Yes, Exodus wrote the book (or at least a chapter) and we definitely know the plot (listen to the lyrics and you’ll get my attempt at humor).

Time to let a fast one outta the bag! Check out this advance preview of the title track ‘Blood In Blood Out’ and get another taste of our upcoming new record! Fast raging thrash! One of many in the new disc! Bay Area sickness to slap you upside your face!

Furthermore, in an interview with Billboard (where the track premiered), Holt commented on the song’s meaning:

A lot of people asked if [the song] had anything to do with Rob [Dukes] being replaced in the band, but as convenient as that sounds, the title, the lyrics, they were all there when Rob was recording it. I hate to disappoint them on that one. It wasn’t autobiographical.

Let us know what you think of “Blood In Blood Out” in the comments section below!