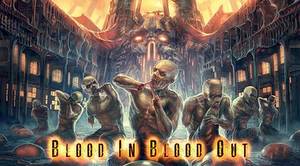 We’ve been stoked to hear this new Exodus track featuring Metallica’s Kirk Hammett hammering out a solo. The wait is finally fucking over and the new track, “Salt the Wound,” is available for mass consumption. Do not miss this as it’s a total ripper and it’s the first time Exodus founding member Kirk Hammett has appeared on an Exodus record, outside of demos.

“Salt The Wound” is cut from the new Exodus album Blood In Blood Out, hitting stores on October 14th in North America via Nuclear Blast.

Guitarist Gary Holt explains that Hammett was more than ready to play on Blood In Blood Out:

Having Kirk play on the new Exodus record kind of came about after I played so many shows with Metallica while touring with Slayer over the past four year. It started the same way most of these things do, as a lot of chatter while having a good time, but Kirk was more stoked to play on the new record than anyone. He never got to play on anything with Exodus since the first demo despite being a founding member, so I think it really meant a lot to him. Coming full circle so to speak. So I chose the song “Salt the Wound” since I thought the rhythm section for the first lead was right in his wheelhouse, and he killed it! He came in and busted out several takes and his solo complements mine perfectly. Then we drank beer and ate barbecue! Epic time!

Let us know what you think of the track and Kirk’s involvement in the comments section below.