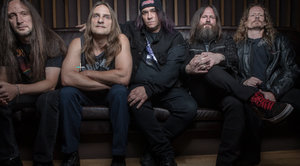 We already knew that Metallica’s Kirk Hammett made a contribution on the upcoming Exodus album, Blood In Blood Out, but there are plenty of other guest spots to boast about. The album has an October 14th release date in North America.

We ran into each other a couple times. I knew what I wanted to hear and I knew he could do it, and could do it that day. So we sent him a file with the drums and guitars we already had there and just told him to go crazy with it.

The legendary Chuck Billy of Testament also appears on the album, lending his talents to the track “BTK.” Returning vocalist Steve Souza said of Chuck:

Chuck and I have known each other forever. We work really well together, we know each other really well. So if I’m doing my vocals and he’s there, I can trust him to go ‘No way, Zet, doesn’t sound good like that. Do it like this’ or ‘Yeah that’s killer.’ If he says it sounds killer, I know it is.

As mentioned, Kirk Hammett plays on Blood In Blood Out, contributing a solo to the track “Salt the Wound.” Again, Holt comments:

This was actually the first time Kirk got to play on an official Exodus release. He did the early demo, and then joined Metallica and didn’t do anything with us after that. So he was totally gung-ho about it. He came down and ripped out a bunch of takes and we picked the best one and then had a barbecue and drank beer.

In an interview with Rolling Stone Hammett said:

It felt really casual, really cool – just like it did back in 1980 when we were all just hanging out back in the day.

Blood In Blood Out can be pre-ordered at nuclearblast.com