UFC 180: Velasquez vs. Werdum – First Event In Mexico Sells Out In 8 Hours 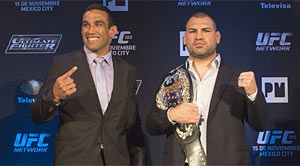 Fans made history at the box office, as well as online, to sell out Mexico’s first ever live UFC event. UFC 180: VELASQUEZ vs. WERDUM is the fastest sell-out in the history of the Arena Ciudad de Mexico and it will also set a new attendance record with over 20,000 fans attending the monumental event.

That we’ve sold out in the blink of an eye is proof that Mexico is ready for its first UFC event and shows the true devotion of UFC’s fan base,” said Jaime Pollack, UFC Senior Vice President, International Development and General Manager, Latin America. “We couldn’t ask for a better partner in Zignia Live, who provided the staffing and technology to keep pace with the high demand and ensure a seamless experience from UFC fans in Mexico and around the region.

The full UFC 180 fight card will be announced shortly. Stay tuned on Yell! Magazine for the update.