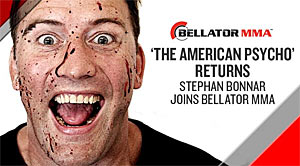 “The American Psycho” came clean recently on whom he wants first in Bellator via MMA Fighting:

I want everyone to know I’m coming out of retirement because it’s time to free the MMA world of the virus that’s known as Tito Ortiz. We’ve been suffering through his boring fights for too many years, and it’s about time that someone beats it out of him once and for all.

Bonnar’s fight is expected to be announced shortly. Stay tuned on Yell! Magazine for the update.