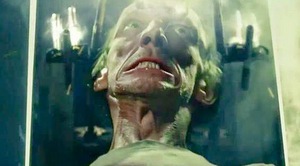 While at Fantasia this year, we had the honor of sitting down with the two directors of the alien genre film Ejecta, Chad Archibald and Matt Wiele, as well as the leading man, the legendary Julian Richings (Man of Steel, Cube, Wrong Turn, X-Men: The Last Stand). The film was a fantastic exploration of “what if,” picking up where most alien films finish. Check out our review of Ejecta on Yell! Magazine.

We covered a lot of ground in the interview and dug in deep to uncover the secrets behind Ejecta, including the backstory of its alien being. We also got some news on the future projects of these three gentlemen, some of whom are part of the team that has brought us Septic Man, Monster Brawl, Antisocial, and The Drownsman.