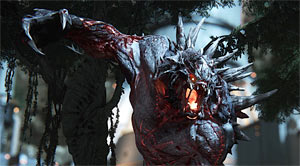 Evolve, the next-gen of multiplayer shooters from the creators of Left 4 Dead, was originally slated for release in October, but now publisher 2K Games is forced to delay the game until February 2015.

After being positioned as 2014’s “defining” Xbox One and PlayStation 4 game, it appears that developer Turtle Rock Studios isn’t taking that accolade for granted. According to the studio’s president, Karl Slatoff, the creative team behind Evolve requires more time to polish the co-op FPS. Since next-gen consoles hit the market last year, I’ve noticed that this issue seems to be a lot more common than before because it feels like developers still have lots to learn on both leading consoles. By no means, should this be considered a bad thing, in my opinion.

Slatoff also mentioned that the new release window for Evolve is “pretty terrific” in terms of competition:

It’s not at all crowded, and we will benefit from the fact that there are a lot of holiday sales of consoles so the install base will be bigger.

2K Games will officially release Evolve on February 10, 2015, on Xbox One, PlayStation 4, and PC; no last-gen versions have been announced yet.