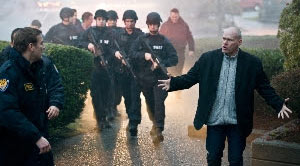 Uwe Boll is one of the most controversial directors in the history of cinema. His film oeuvre, mostly made up of violent action films and video game adaptations, is almost universally panned, and that might be the last time you see the word “oeuvre” in the same paragraph as “Uwe Boll.” To many, a word more befitting of Uwe Boll’s collection of work is “heap” or “dump” or “multiple toilets.”

I recently watched his newest film, Rampage: Capital Punishment, a sequel to his 2009 film Rampage, and it’s one of Boll’s better efforts. Boll manages to create a sense of real dread in the beginning, mainly due to the fact that he switches up between fast, frenetic camera work and editing, and a slower style. Though the narrative runs thin by the end, Boll, and actor Brendan Fletcher, manage to create something that doesn’t shy away from forcing audiences to make their own decisions about the “moral” of the story. It does not feed you some greater purpose. You’re either with or against Rampage: Capital Punishment. There is no in between.

Yell! Magazine and I did an interview with Boll, and though he’s best known for inviting critics to come get themselves clobbered in boxing matches against him, that did not happen here. Instead, he gave us some of the reasoning behind creating a sequel to Rampage, and his passionate feelings on a financial crisis.

No.1 What made you decide to do a sequel to Rampage?

Uwe Boll: People liked the first Rampage and I had the feeling the story around Bill was not finished.

No.2 What attracts you to a character like Bill Williamson?

UB: The craziness and that he is basically a cynical mirror of our society. You are successful if you are ruthless. In part 2 now, it turns out that he is a monster but also a very good political analyst. Hannibal Lecter was also very simpatico.

No.3 In a lot of movies that deal with similar subject matter, there’s often some kind of moral undertone, which contrasts to what the killer believes. In these films, we mostly just get Bill Williamson and his beliefs, and we’re forced to digest that. It’s a little more disturbing. Do you like taking the audience along for that ride, making them voyeurs in a situation that they obviously don’t agree with?

UB: Yes. It’s more fascinating this way instead of good and bad in front of you, like in all the Hollywood movies.

No.4 The movie does a decent job of balancing a sort of documentary style, with frenetic action. What made you decide to shoot it this way?

UB: I and my DP, Mathias Neumann, did that style in part 1 also, but almost in all my political/radical movies, like Attack on Darfur, Stoic, and Auschwitz.

No.5 Did you have any particular films in mind when you started the Rampage series? Any particular influences?

UB: Not really. When I wrote the first part it was really written like how I would write something that I would love to see.

No.6 Is that you, playing the producer Andy? I checked the IMDB page for the film, and you weren’t listed.

UB: Yes, it’s me. As in Postal, I saw here an opportunity to bring a little fun and satire in. A TV producer who starts immediately making money on his dead crew.

No.7 Why did you decide to portray that role?

UB: It was a mix of things. We had no actor and I created the part on set. It was not in the script but I felt a person like this could make the movie even more interesting.

No.8 You did a film called Assault on Wall Street, with themes that were a bit similar to this. What attracts you to this subject?

UB: Assault, with Dominic Purcell, is a real drama about the financial crisis and he has good reasons to kill the bankers. Assault shows the injustice. Seven million Americans lost their houses in the financial crisis and the bankers lost only half of their bonus for two years. It is a joke that nobody from the big banks went to jail for destroying trillions of dollars. In Rampage we have a guy who kills anyhow, anybody, but he has fun while doing it.

UB: I have a Viking film, a thriller called 12 Hours, and I want to finish the story around Bill with Rampage 3.