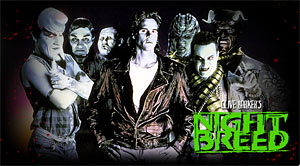 A big shout-out to DailyDead for posting a new update directly from a reliable source, Michael Plumides, a filmmaker who was deeply involved with the director’s cut of Nightbreed that’s coming to Blu-ray in the very near future. Micheal will also been working on the Nightbreed TV series, which hasn’t been talked about much until now.

We’ve been actively developing the Nightbreed TV series at Morgan Creek with Clive Barker for two years. We hope the newly restored Director’s Cut will help us illustrate how wildly popular the series could be to potential buyers. I recently penned four episodes including the pilot, with material all approved by Clive and Mark Miller at Seraphim Films. We have also been developing new Nightbreed creature concepts and I’ve been collaborating with Tate Steinsiek (SyFy’s Face Off) for some months now, to create all-new designs for old characters and a few new ones, as well. We think the fans will be very pleased – by staying true to the source material but also modernizing the concepts, we hope Nightbreed will appeal to this millennium’s viewer. By incorporating mind-blowing practical and visual effects with a product that has achieved legendary cult status we see a winner in the 18-49 market, especially in the absence of shows like True Blood, Fringe or even Sons of Anarchy. Barker’s vision is an amalgam of science-fiction, fantasy, and horror with violent, sexual overtones laced with dark comedy, and the Nightbreed series hits on all cylinders.

It’s confirmed! The series has been in development for a number years, but is still being shopped to buyers. What about the pilot and will it stay true to the original source material?

Here is what Michael had to say about that :

It’s too early to say regarding a pilot, but there is significant interest in the Nightbreed property – and we have the Occupy Midian movement to thank for that. But in writing the scripts, I made every effort to stay true to Barker’s vision for the purists without deviating wholly from the source material – even consulting not just Clive and Mark but Barker experts and aficionados – people that live and breath Barker’s work. Also, I will say, it feels American, but the British accent shines through, occasionally.