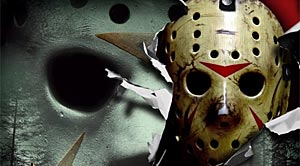 Yesterday, in an action that would prove ironic considering the main content of this news story, I watched Friday the 13th Part 3, in 3-D, on my very non-3-D television. The movie was a swarm of blues and reds, and proved to be an exercise in the imagination more than anything else. I could see where the 3-D was supposed to go, and where it sort of was, but I mostly wished that I could just watch a decent Friday the 13th movie in 3-D, in theaters. That way, I wouldn’t have to pay attention to Jason AND simulate the loss of vision due to suffocation at the same time.

At CineEurope, Paramount Picture International SVP Edward Ryan announced that not only will we be getting a new Friday the 13th on November 13, 2015, but it will be in 3-D. I’m excited for this, because why not 3-D? A lot of people will throw their own shit into the air when they hear that something is going to be shown in 3-D, because they see it as sacrilege. It’s against their own made-up religion, and they get angry whenever the maddening specifics of this devotion to horror films isn’t met. But what about the Friday the 13th series is harmed when you put it in 3-D? What integral thing is lost? “Oh, man. It totally ruins a hockey masked killer shoving a spear through the torsos of two people having sex on a bed when you put it in 3-D!” You can all rightfully start grumbling when someone eventually tries to convert Blue Is the Warmest Color to 3-D, but let Friday the 13th be in 3-D. It isn’t messing up anything.