Killer Klowns From Outer Space Could Be Coming To Television 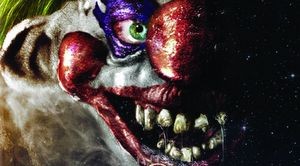 I’ve said it before, and I’ll say it again: I hate clowns. And, yes, that includes Klowns. But I know that a lot of you love them, and more specifically, you love Killer Klowns from Outer Space.

While your hopes for a Killer Klowns sequel has all but been squashed via Charles Chiodo’s confirmation that MGM doesn’t feel there’s enough fan interest over at iHorror.com, (http://ihorror.com/exclusive-is-a-killer-klowns-from-outer-space-tv-series-in-our-future/) there is still hope for your Klown fix. Charles and his brothers, Stephen and Edward Chiodo, are interested in bringing their Killer Klowns creation to the small screen, and preferably through a network rather than a Web series.

If MGM isn’t down for that either, the Chiodo brothers are open to the possibility of creating new clown characters for something original.

We’ll keep you posted as news on the Killer Klowns develops.

What would you prefer, a Killer Klowns sequel or a television series?