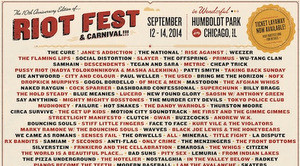 We’ve been bringing you incremental updates about the Riot Fests being held in Chicago, Toronto, and Denver. Today, the flagship festival in Chicago announced a bevy of new bands who will join the already stellar lineup that includes Slayer, The Cure, Jane’s Addiction, and Wu-Tang Clan.

This is really about thanking our fans. The work put into the lineups this year and things like the essential albums plays is for them… as clichéd as it may sound, it’s the truth. We’d be nowhere without them and maybe the way we thank them is by giving them a fest where we can all sing along.