Do You Want A Remake Of “Shocker” As Much As Peter Berg? 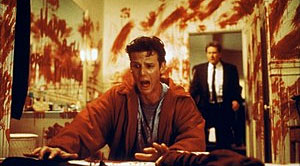 Wes Craven has had a ton of success in creating classic franchise slasher movie villains. He’s responsible for the Hills Have Eyes mutants, Freddy Kruger, and Ghostface, from Scream. He also planned to turn the film Shocker into a series, but, hey, 75% is a passing grade.

Now, Peter Berg, star of the original film, has said that he “would love to remake it,” and that “Wes would direct it; I’d star in it.” Now, aside from one or two people, you would think that the only person idealizing a Shocker remake would be the fictional villain from the movie itself, but Wes Craven has said that he “would like to redo Shocker, just to get the special effects right, because we had a real special effects disaster on the film.” If you’ve seen Shocker, you know that Wes’ words are true. That movie looks like someone shot it, hated it, and then crayoned in all the effects later. Wes Craven says that the guy who was doing all the visual effects on Shocker “kind of flamed out, because he was attempting more than he could actually do” and that some of the special effects in the film are “pretty sketchy.” I hate to be a pessimist, but making a good Shocker movie seems to be more than probably anyone could do.

Wes hasn’t made a film since Scream 4, but I think he has a few more left in him. I don’t think he should waste his time on a Shocker remake. If he’s going to revisit something, he should make another Serpent and the Rainbow. That movie kicked ass.