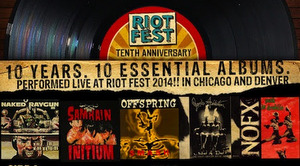 Last week we let you in on the announced lineups for the three locations of Riot Fest, in Chicago, Denver, and Toronto. It’s Riot Fest’s 10th anniversary, and this week organizers have announced a special treat for fest goers: 10 bands will be performing an essential album from their catalog.

For whatever reason it seems that Torontonians will be left out of the 10-albums fun, as this special display is currently only scheduled for Chicago and possibly Denver.

During last year’s Violent Femmes’ set at Riot, where they performed Violent Femmes unannounced in its entirety, it dawned on me that if we ever did an album play thing at Riot, we should make it something that the fans would remember years from now. So, I literally was walking back to my trailer after their set and it hit me… ‘10 Years. 10 Essential Albums.’… and yeah, it grew from there.

Riot Fest is holding out on the announcement of the 10th band, but the 9 bands who have confirmed and the albums they’ll be performing are:

Tickets for all 3 Riot Fests are on sale now via www.ticketfly.com. More band announcements are forthcoming as well as a few more 10th Anniversary surprises.