I’ve seen a lot of articles comparing the new Godzilla to Jaws, and, in a sense, it’s a decent comparison. You do get little glimpses of Godzilla before the big reveal – a spine here, and some scales there. But the comparison stops at that. Because, unlike Jaws, Godzilla cannot raise tension to save its life. Between every little morsel of monster action that we get, the human drama falls dead.

I can handle flat human drama. The Godzilla series has had flat human drama for decades, but that human drama never distracted me from enjoying the Godzilla fighting/stomping itself. The non-monster stuff here is maliciously uninteresting, so much so that it stains the monster stuff. All of the time I should have spent enjoying watching Godzilla bite and tear and blast at his enemies, I spent like a guy who’s been punched a few times before, and flinches whenever someone raises their hand near him. I knew it would be over too soon, in the most disappointing way possible, that disappointment caused by the knowledge that I would be returned into the lackadaisical arms of the little people, running/standing around and looking worried.

They’re a relatively small part of the actual movie, but Godzilla is soiled by the teases it gives, when it really should be actually ending scenes. If Jaws had been directed like Godzilla was, the two guys on the dock would’ve thrown the one dude’s wife’s roast and then the scene would’ve cut to black as soon as the dock broke and the dude slid into the water. And that’s cool for a little while, as the movie starts to come together and the main plot line begins to take shape, but when you’re almost two hours into the thing and you interrupt the monster fighting for another look into Aaron Taylor Johnson’s static (but pretty, I must admit) eyes, you start to resent the movie. 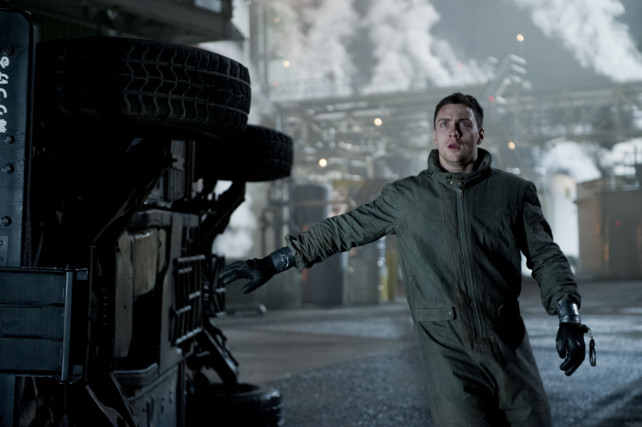 I need reminders every once in a while that I’m not a film critic. I am very much an audience member, a film lover who really likes to publish his ideas and quips on the Internet. So maybe I’m missing something integral when other people found the complete lack of monster action satisfying. I was definitely included in the group in the theater who groaned whenever Godzilla cut away from action to something far blander (though I tried to keep my groans inaudible). I didn’t need Godzilla to be The Raid with 40-story-tall behemoths. I didn’t even need Godzilla to be Pacific Rim, which was an attempt to cram a lackluster story into someone smashing action figures together. But I needed Godzilla to be a complete movie.

Godzilla, despite being credited solely to Max Borenstein, was obviously written, and rewritten, by a lot of different people. The characters and the plot were sanded down to the bone, and so, if the actors weren’t Bryan Cranston, who set his emotions on “High” for the 30 minutes that he’s onscreen, they weren’t even passable by minimal standards. We knew that guy was a soldier. What are his flaws? What are his goals? Who gives a fuck! He survives without really doing anything, and I guess that makes him the main character that we should root for, right? I know that that guy is a scientist, and he seems really interested in Godzilla, but why? Oh, that’s kind of a cool thing with the watch and Hiroshima and NOPE! Back to the guy who knows about bombs.

Godzilla and his MUTO foes look gorgeous, especially when basked in the grey and red of the destroyed city. I can’t fault the film at all for its portrayal of God “Get off my lawn!” Zilla. With his hunched, massive form and his incredible roar, they pulled off the King of the Monsters to a tee. And the only thing missing from the last few minutes of the film was Ken Watanabe shouting “He gave us a signal!” and pointing a large light with a Godzilla face on it towards the sky. But there needed to be more of him. Intricate, grand scale special effects cost a shit ton of money and time to produce, but the balance that adventure movies need to have between the thrilling and low key parts wasn’t there.

I hesitate to recommend this movie, and I almost want to tell people to save their money and wait for the “Godzilla 2014 Monster Fight Compilation” that will inevitably arrive on YouTube. If you’re a diehard fan of Godzilla, you’ve probably already seen it by now, honestly. But if you’re looking to be won over into joining the Cult of Gojira, this isn’t the movie for you.