7 Godzilla Fights You Want To See Happen Before You Die 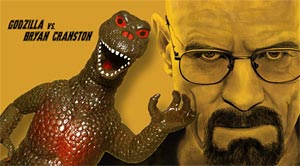 Just now, a thousand different men Snapchatted their junk to unsuspecting women. In the second before that, the Legendary Pictures promotional team came up with 50 new, catchy hashtags to help promote Godzilla, set to be released on May 16th. We live in a terrifying and awful new age, except for the part about the new Godzilla flick.

Godzilla must adapt to this new age, and that’s why all of his foes need to be updated, hip, relevant, and Search Engine Optimization friendly. Not enough people are clicking on “King Ghidorah” anymore. Executives want Godzilla to appeal to every possible demographic, he needs some villains that advertisers can get behind. They need an opponent for Godzilla that they can interview in Seventeen magazine.

No.7 Godzilla vs. VMA Beast Story: When a nuclear explosion rocks the Video Music Awards, the bodies of Miley Cyrus, One Direction, Pitbull, and Macklemore are all fused together into a screaming, pained blob of flesh. The VMA Beast is barely a threat to Godzilla, but it will mainly serve to give Miley Cyrus another clip to put in her acting reel, and hopefully jump start the production to a sequel to LOL, LOL 2: LMAO.

Powers: Social media reach, unlimited selfie-taking capabilities, the ability to be both Mr. 305 and Mr. Worldwide.

No.6 Godzilla vs. Bryan Cranston Story: Greatest actor ever Bryan Cranston was irradiated by terrorists who just couldn’t handle how charming he was. Really, the man is just too likable for this Earth. Sadly, the plan against America’s backbone was successful and Bryan Cranston grew to 400-feet tall. Godzilla, one of the least charming people on the planet, felt threatened by Bryan, and traveled to Los Angeles to challenge him.

No.5 Godzilla vs. Annoying Godzilla Fan Movie Title: Shut Up, Really. No One Cares About Your YouTube Reviews

Story: Paul Sims, known on Internet message boards as “monsterzero77,” will stop at nothing to get people to understand that “It’s pronounced GO-JEER-A, not GODZILLA. God, you morons.” In an experiment gone wrong, he grows himself to 30 stories in height. Luckily, Godzilla, who doesn’t give a shit about what you call him, arrives just in time to prevent Paul Sims from accidentally stepping on actor Akira Takarada at an autograph signing.

Powers: Atrophied arms and anger directed toward any hotel that doesn’t have free Wi-Fi. Ready at any opportunity to tell you that the ending of King Kong Vs. Godzilla was the same in both the Japanese and the American version.

No.4 Godzilla vs. Mechagodzilla, but with Drones or Something

Story: In an effort to capitalize on both the controversy surrounding drone technology, and the invigoration of classic Godzilla fan interest caused by providing a classic foe for Godzilla to fight, Mechagodzilla, but with Drones or Something will be a storyline praised for its allegorical touches and a lot of boring stuff.

Powers: All the powers of a normal Mechagodzilla, but with metaphors about Barack Obama’s presidential prowess. The Academy goes nuts for that kind of shit.

No.3 Godzilla vs. The Avengers Story: I know that Godzilla has faced the Avengers before when he had his own Marvel Comics run, but this will be a cash-in like the world has never seen before. It will be quick, as a Godzilla vs. The Avengers movie would cost about $2 billion, and be relegated to the post credits sequence of Thor 3: Revenge Of The Fallen, or whatever it’s called.

Powers: Thor has a hammer. Iron Man has a super suit. Captain America has a shield and can punch pretty well. The Hulk can hulk up. Black Widow has the potential for about a thousand spin off movies if Hollywood can get its head out of its ass about female superhero movies. Hawkeye has a bow and arrow. But you all knew that already.

No.2 Godzilla vs. Pacific Rim Story: Get ready, readers of the Internet, for the thousands of Godzilla vs. Pacific Rim articles that you’re going to be bombarded with in the week after May 16th. It’s just inevitable that everything with similar qualities to something else will have all the fun torn out of its spine with mindless comparison pieces. But what if you combined the two properties into an actual movie? Guillermo del Toro works on no less than 20 different projects at the same time, but I think he’d be totally down for watching his robots fight the King of the Monsters.

No.1 Godzilla vs. Dwayne Johnson Story: Since it’s already been settled that Dwayne “The Rock” Johnson’s skin won’t tear due to the stress of all the muscles underneath, I think he should try to get as huge as possible. I know it won’t be fun for him, eating 5 tons of brown rice, 50,000 chicken breasts, and drinking 200 gallons of protein shake a day, but it will all be worth it when both the release of the film The Monsters and the main event of Wrestlemania XXXII occur in the spring of 2016.