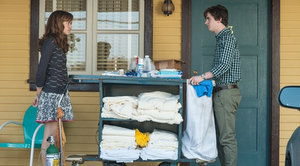 “Presumed Innocent” was a perfect Bates Motel episode. It was so perfect that it felt like a Season Finale, from the recap intro through till the end. It felt like a lot happened this week, but when all is said and done, it matters that Norman is in the police system, and there’s more to Norman’s blackouts that we don’t yet know.

The episode opened with a distressed Norma leaving Norman a voice mail message as she hurried herself to city hall. Upon her arrival, she learns that in addition to a parking pass, ID, and keys, she’ll also be given an office. Norma is surprised, and the woman helping her seems smug about it, as if she “knows” the why and how Norma got the position and the perks.

Is it possible that Nick Ford is pulling political strings to get his puppet into position? Ya think?

That question is asked more directly by Norma’s neighboring councilman, Max Barowitz, when he points to the irony that Norma called Lee Berman an asshole, Lee dies, and she gets his seat on the council. As Max introduces the bypass to the conversation, they’re interrupted by Sheriff Romero, who needs Norma to come with him to the station.

By this point we already have seen Norman in the backseat of a squad car, so we know Romero is escorting Norma to the station because her son has been brought in for questioning. There are several purposes served by Norman pushing Cody’s dad, Jimmy, down the stairs and killing him. Initially, paralleling his own father’s death, it shows us what Norman is capable of during a blackout. More significantly, however, it led to his stay and his processing at the police station. Skipping to the big “reveal” at the end of the episode, with Norman’s DNA the police were able to match the unidentified semen in his former teacher, Ms. Blair Watson.

Now the question to ask is: did Norman kill Ms. Watson before or after he had sex with her? Is Bates Motel twisted enough for some necro action? Also, how will Nick Ford react to this news?

Jimmy’s death also leads to Cody’s exit from the show. I hope she’s not gone for good, but I have the feeling she is. I don’t like this move on the show for two reasons: first, I liked her and there was a great dynamic there to be played with between Cody, Norman, and Norma. Second, it’s too easy; same thing with Bradley. Bates Motel just has a habit of creating exits for the girls in Norman’s life when things get too complicated.

But, before Cody’s exit, she had another important role to play. The day after their questioning at the police station, Cody, before leaving for her aunt’s, visits Norman to say goodbye and to tell him that he needs to talk to his mother about his blackouts. Cody tells him that Norma spoke with her at the station about not telling the police about his blackouts and that she could see that whatever is going on with him terrifies his mother.

What is the history with Norman’s blackouts that only Norma knows about?!?

Of course, Cody’s reveal to Norman led to him asking Norma, “Who am I and what do I do?” And she obstinately refuses to discuss the matter, “I did say those things and they are true, and we’re not going to talk about them.”

With just three episodes left, let’s hope Bates Motel hasn’t blown its load on this episode. What do you think will happen with the rest of the season?

-Through Remo’s talk with Dylan, we learned the name of their boss (Zane’s sister) — we can now call her Jody.
-Did the desk clerk at the police station, the one texting and laughing, seem a bit too deliberate? Was it a needless attempt to show us Norma’s feathers getting tussled?
-Norma’s affection for Emma becomes even more apparent after Emma offers to stay by her side during the police ordeal — “You’re such a good girl.” Aww
-It was interesting to see Norman manipulate his mother when he was frying eggs. How he used George’s trust that Norman didn’t kill Jimmy and turned that against his mother. Norman does seem to truly want his mother to believe him.
-Zane knows Jody has tasked Dylan to keep an eye on him.
-With Zane’s attack on the Ford compound, are the showrunners setting up a drug war for the Season Finale?