UFC: Chael Sonnen Wants To Put Rich Franklin Away Before He Retires 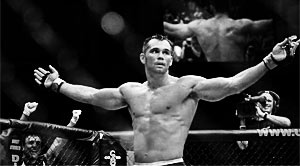 Former UFC Middleweight Champion Rich Franklin had the strap taken from him by Brazilian mixed martial artist Anderson Silva back in 2006 at UFC 64. It was from that point on Silva dominated the middleweight division until he was dethroned in July of last year at UFC 162. Chris Weidman was the fighter to put an end to Silva’s reign, but Franklin “100-percent wholeheartedly” believes he can beat Silva in a trilogy, if the UFC ever gives him another shot at the former pound-for-pound MMA king. Keep in mind, Franklin still has one fight left under his UFC contract.

Franklin also believes that he can beat UFC Light Heavyweight Champion Jon Jones in the right state of mind, he recently said in an interview:

Would I fight Anderson a third time? Absolutely. Is it because I feel like I have some unfinished business? Not at all. It’s just, in my mind as a champion and to have the mentality of a champion, I 100-percent wholeheartedly believe that I can beat Anderson in a fight. Not just Anderson, but just anybody like that’s the mentality you have to have. If somebody says ‘Rich do you think you can beat Anderson Silva in a fight?’ Absolutely, yes. ‘Rich do you think you could beat Jon Jones in a fight?’ Absolutely yes. Like, you have to answer ‘yes’ to those questions and not just because it’s a formality, but because you believe that stuff, because you believe in yourself and if you don’t believe in yourself then you don’t have any business pursuing a title in a sport or something like that, you don’t have any business in the pursuit of being the best. And so yeah I would take a fight with Anderson. It wouldn’t be for any reason like redemption of vengeance or retribution or any other kinda cool word that we’ve seen on a UFC poster before, but yeah I would fight him and I believe I could beat him and that’s just me with the champion’s mentality.

However, before the recent episode of TUF Brazil 3 aired on UFC Fight Pass that featured a brawl between between Chael Sonnen and Wanderlei Silva, “The American Gangster” revealed that he wants to be the one to put Franklin away before his contract ends with the UFC.

No, no, no… The math teacher doesn’t walk away. I put him away. You got one good one left. I’m not asking…

If Sonnen wins or loses against Wanderlei at UFC 175, I personally would love to see two all American fighters go at it inside the Octagon. Joe Silva if you are listening out there, please make Sonnen vs. Franklin happen. I’m sure MMA fans will pay to see this fight too.