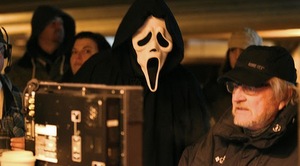 Jill Blotevogel has penned the pilot script and Wes Craven will direct. This is the news nearly a year after Craven said he would direct the Scream television adaptation “if they have a great script/concept.”

With Craven’s proverbial stamp of approval, MTV will soon move forward with casting and filming should commence this summer. According to sources for BloodyDisgusting, plot details for the Scream series indicate that:

the ‘rules’ of slasher movies is at the center of this new series, as it has been for the franchise. The pilot explores a YouTube video that has gone viral and causes problems for the protagonist, Audrey, who is caught in the middle of murder and the town’s troubled past.

Basically, it sounds like an updated version of Scream for the Internet-trolling generation. Please let some trolls die!

TVLine has provided a breakdown of the main characters:

* Harper Duval: A 16-year-old beauty “who’s a little too introverted and intellectual to be a social butterfly” but has nevertheless been annointed by the popular crowd to be one of their own. “She feels guilty that she has drifted away from former best friend Audrey,” but at least she’s got a Gilmore Girls-esque relationship with mom Maggie to keep her sane.

* Audrey Jesen: Haper’s former BFF is described as “the bi-curious daughter of a Lutheran pastor” who’s “more arresting-looking than pretty.” This “artsy loner” dreams of being a filmmaker and shares a close bond with tech genius Noah.

* Noah Foster: Audrey’s closest confidante is “creative, brilliant and tech-savvy enough to be the next Steve Jobs.” Lucky for him, he’s got a great sense of humor (“a la John Cusack in his teen prime”) that helps him navigate the halls of his high school. What’s more, Noah possesses “an encyclopedic knowledge of books, films, TV, apps, etc.”

* Margaret “Maggie” Duval: Harper’s mom, in her early to mid-40s, is the town’s medical examiner, “a grown-up science geek who plays down her beauty.” Maggie spends a lot of her time trying to make up for the fact that Harper’s dad abandoned them. Oh, and she’s harboring “a dark secret from her past.”

Let us know what you think of a Scream television series.