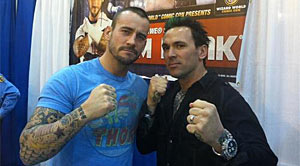 Now that Phillip Jack Brooks, better known by his ring name CM Punk, has walked out on the WWE to avoid a feud with Triple H for WrestleMania 30, there’s been lots of talk about him possibly scrapping in MMA.

In an interview with Ariel Helwani for MMA Fighting, Punk definitely showed interest to compete in real a combat sport. Adding to his credibility is the fact that he already trains Brazilian jiu-jitsu with Rener Gracie. Although, nothing is officially confirmed in the books yet, the 35-year-old entertainer knows he can get fans talking about him in MMA:

I’m 35. I never competed in martial arts, so who’s to say if I would be good or not, I really think there’s a chance, but I’m mainly just saying so I can read people talk shit on message boards.

Since the word on the street is out and spreading like wildfire, MMA newcomer and former Green Power Ranger, Jason David Frank (1–0), wants to be the first guy to give Punk an ass whooping inside the cage. In fact, not just any cage, but a pro fight in World Series of Fighting (WSOF):

So now that CM punk is out of his contracts and wants to do MMA, why not me? He already said he’d fight me. I got this on video from a fan. Come on CM Punk, we could make this an awesome fight. Plus his weight is way down… I’ll make any weight to make this happen!!

Executive Vice President and matchmaker Ali Abdel-Aziz of WSOF is also interested in the fight, and believes Punk can do what Brock Lesnar did in the UFC. “If Brock Lesnar can do it, he can do it,” he said.

I’m pretty sure WSOF is working hard to make this fight happen as we speak.