“Royals” Remixed By Sid Wilson – Avoid Listening At All Costs 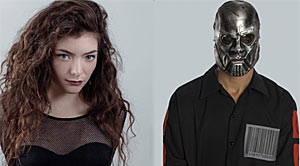 This is still pure garbage, even with a metaller involved. Don’t say I didn’t warn you, but if you’re still curious to hear what Slipknot‘s Sid Wilson mixed up over the week, then peek into this.

Over the weekend, pop artist Lorde picked up two wins at the 56th Annual Grammy Awards for Song of the Year and Best Pop Solo Performance for her debut single “Royals,” a song I despise hearing on the radio nearly every morning. Sadly, #0 jumped on the popularity train and mixed up the song to his taste. Unfortunately, this remix of “Royals” still sucks, but what’s the point on downplaying it so much? You’re going to listen to it no matter what I say.

Hit the play button and get ready to cringe.