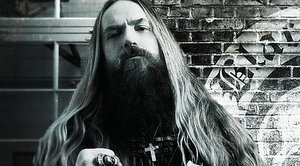 Are there any Society Dwelling Mother F*ckers out there? Let yourself be known. Black Label Society has released the new track, “My Dying Time,” from their upcoming album, Catacombs of the Black Vatican.

The song debuted on Sirius XM Octane the other day, and the fans gave it their metal fist of approval. Listen carefully and you’ll notice that Zakk Wylde didn’t use his signature “harmonics.” If you’re a BLS fan, then you’ll know exactly what I’m talking about. Apparently a lot of non-BLS fans don’t care for that and think it’s over-used. Well, it Zakk’s signature style of playing, so I wouldn’t be complaining if he’d used it.

“My Dying Time” has a sweet intro to get you into the mood, then obviously since it is BLS, it gets heavy right away. And of course, you can’t forget the lightning-speed solo.

Below are the song tracks that will be on the album due out April 8th.