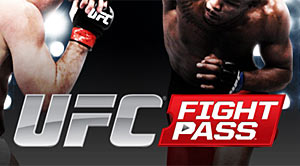 The Ultimate Fighting Championship organization announced the launch of UFC Fight Pass, the new digital subscription service that is a must-have for mixed martial arts fans.

We’re very excited to announce this unique subscription service for our great fans. As the demand for live UFC events around the world continues to increase, we’ve responded by planning more big shows in international markets in local primetime. In 2014, there are going to be more international events than ever before – but we wanted to make sure that fans around the world could see these fights too.

The UFC has always been ahead of the game when it comes to new media and new technology. We are putting together some sick cards in international markets and with UFC Fight Pass fans never have to miss a single UFC event, no matter where in the world the fights are taking place.

In addition to more than nine exclusively live fights per month, UFC Fight Pass will also offer unparalleled on-demand access to the biggest MMA fight library in the world.

Zuffa has the biggest fight library on the planet, and with a UFC Fight Pass subscription, fans will get access to thousands of fights from the entire history of the sport. This is what fans have always wanted – we are giving them the keys to the candy store. Subscribers will be able to watch, on demand, the greatest fights and greatest fighters in the entire history of this sport. And I mean everything, from Royce Gracie, Matt Hughes, Chuck Liddell, and Anderson Silva to Frank Shamrock, Wanderlei Silva, Kazushi Sakuraba, and Fedor Emelianenko.

Subscribers will be able to access hundreds of hours of content from the archive, which includes two decades of UFC fights and the video libraries of other MMA organizations including PRIDE FC, PRIDE Bushido, Strikeforce, EliteXC, the World Fighting Alliance, Affliction Entertainment, and World Extreme Cagefighting. See attached FAQ sheet for further details.

Additionally, there will be newly created content for the service including regular behind-the-scenes reports, fighter diaries, UFC Upfront, UFC By the Numbers, UFC Fight Camp Insider, and training tips. Plus, there will be exclusive content including the hotly anticipated upcoming The Ultimate Fighter: Brazil season featuring bitter rivals Wanderlei Silva and Chael Sonnen and future international editions of The Ultimate Fighter will be available exclusively on the UFC Fight Pass service. White added:

If you are a fight fan, UFC Fight Pass is for you.

UFC Fight Pass will initially launch in the United States, Canada, New Zealand, and Australia, with a monthly $9.99 price point in all four markets. Content will vary according to local television blackout rules.