Cattle Decapitation Working On Next Album 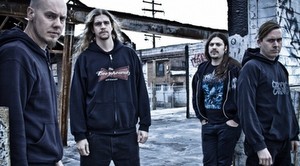 That’s right, throughout 2013, Cattle Decapitation shocked and awed the metal world (remember the video for “Forced Gender Reassignment”?) with their 2012 release, Monolith of Inhumanity, and now the controversial death metal band is preparing to work on the follow-up. The as yet unnamed album is tentatively scheduled for a 2015 release.

From the sound of things, it seems as though the band has a rough sketch of the songs, with at least one song completed in terms of the music. Vocalist Travis Ryan comments:

Since we got home from The Summer Slaughter Tour the guys have been hard at work on new material! I actually go in next week to grab a quick run through of the first new track they have completed so I can start writing lyrics to it. I have heard the track and I hate to say anything just yet because we will be spending the next full year from now working on the next album, but I will say the stuff they’re working on is intense. I can’t wait to start writing lyrics to it and so far is in league with one of our current musical aspirations… to make fans of our last record shit themselves!

We’ll be taking a small break to play a few shows in our region with EyeHateGod and our friends Strong Intention on their January tour!