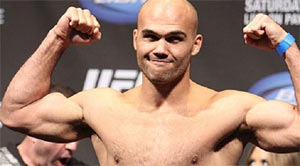 As you all should know by now, Georges St-Pierre (25–2) has officially vacated the UFC welterweight title and will be taking an indefinite leave of absence from MMA. So, yes, after a 12-fight win streak in the UFC, the Montreal-born fighter is finally hanging up the gloves for “a little bit,” as he announced in a press conference call on Friday with UFC President Dana White.

I’ve been fighting for a very long time at a high level, it’s a lot of pressure … I’ve decided I need to take time off. I know the UFC is a business and they can’t wait. One day, when I feel like it, I might come back. But right now I need a break.

Shortly after giving up the 170-pound title, White also announced that Johny Hendricks (15–2) and Robbie Lawler (22–9-1) will square off in the Octagon for the vacated title at UFC 171. A fight that will definitely go toe-to-toe, and most likely end by knockout. You can place bets on that. Hendricks has had eight outstanding finishes by KO in his entire career. In under a minute he last dropped Martin Kampmann at UFC 154, earning him his third Knockout of the Night bonus in the UFC.

Lawler is no slouch when it comes to knocking fighters out either, he has more experience inside the cage and currently holds 19 knockouts on his pro MMA record. Not long ago, Lawler defeated Bobby Voelker with a head kick and punch in the second round at UFC on Fox: Johnson vs. Moraga.

White said during the presser:

There’s no doubt the Johny Hendricks-Robbie Lawler will be an absolute gunfight.