Finally! A New Slipknot Album On The Horizon 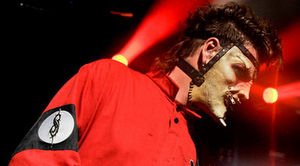 Slipknot fans rejoice. News hit the Stone Sour Facebook page yesterday that there is to be a new Slipknot album sometime in the near future, an album we’ve all been waiting for since 2008’s All Hope Is Gone. There is no word yet on when recording will begin, much less a release date. Check out the news as Stone Sour posted:

With an impending Slipknot album on the horizon, Jim will not be touring with Stone Sour this winter. Everyone involved is okay with the decision and our mutual friend Christian Martucci will be filling in on guitar. It was a difficult decision, but as the fans have wanted another Stone Sour tour and Jim had responsibilities to the writing process with Slipknot, we feel this is the best decision where everyone wins.

Undoubtedly, Paul Gray’s unfortunate death in 2010 has been a contributing factor in Slipknot’s hesitation to begin a new album. There was doubt at one point whether or not Slipknot would continue without Gray, but the band has eased into things over the last three years with some touring and by filling Gray’s bass duties with Donnie Steele, a former Slipknot guitarist.

Stay tuned to Yell! Magazine as news of the impending Slipknot album breaks.